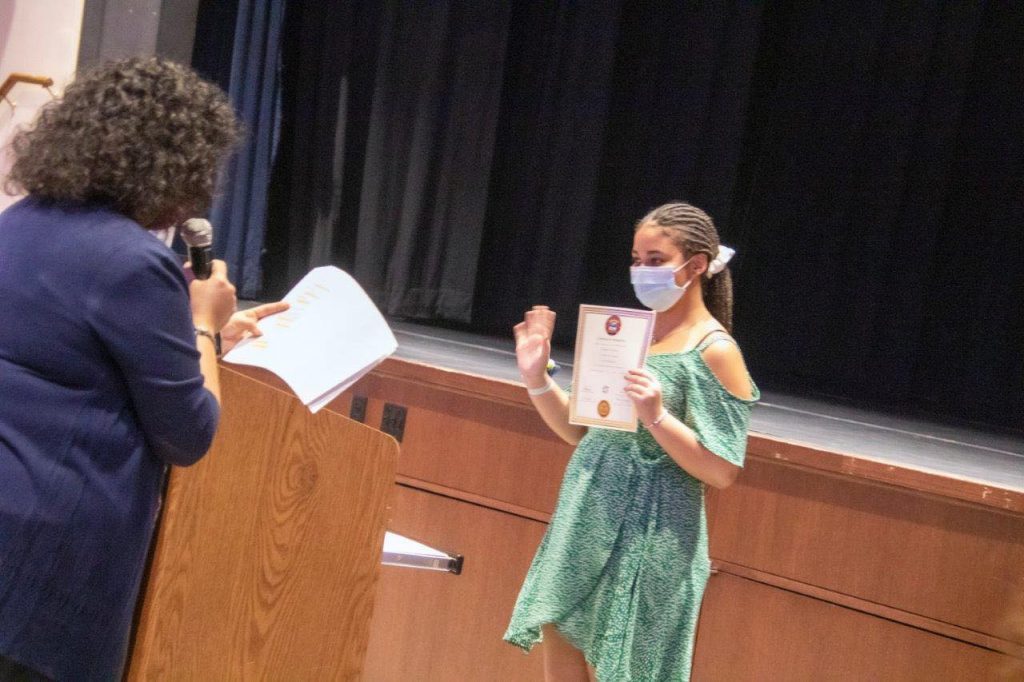 Thirty seven members of the Class of 2021 and one member of the junior class were inducted into the World Language Honor Society on Wednesday, April 21, 2021, in recognition of their dedication and achievements while studying French, Latin and Spanish all four years while at Oak Knoll School of the Holy Child.

Verónika Zavaleta-Tejeda, Upper School World Language Chair, inducted the students who qualified for membership by taking an honors level 4 or higher class during their senior year or have reached the AP level in their junior year, via a hybrid celebration on campus and via live Zoom meeting among fellow classmates, parents, faculty, and staff.

During their time at Oak Knoll, the inductees led workshops for International Day prior to COVID, contributed articles to newsletters La Vista and Écoute-moi, and promoted the study of Latin in the Lower School. 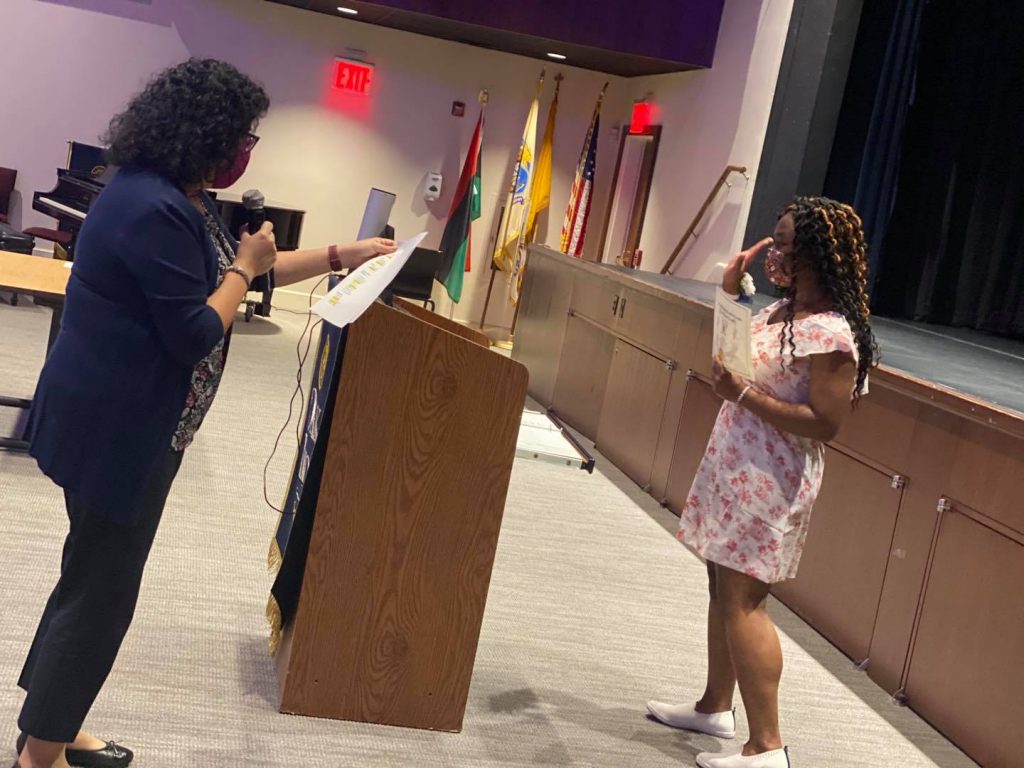 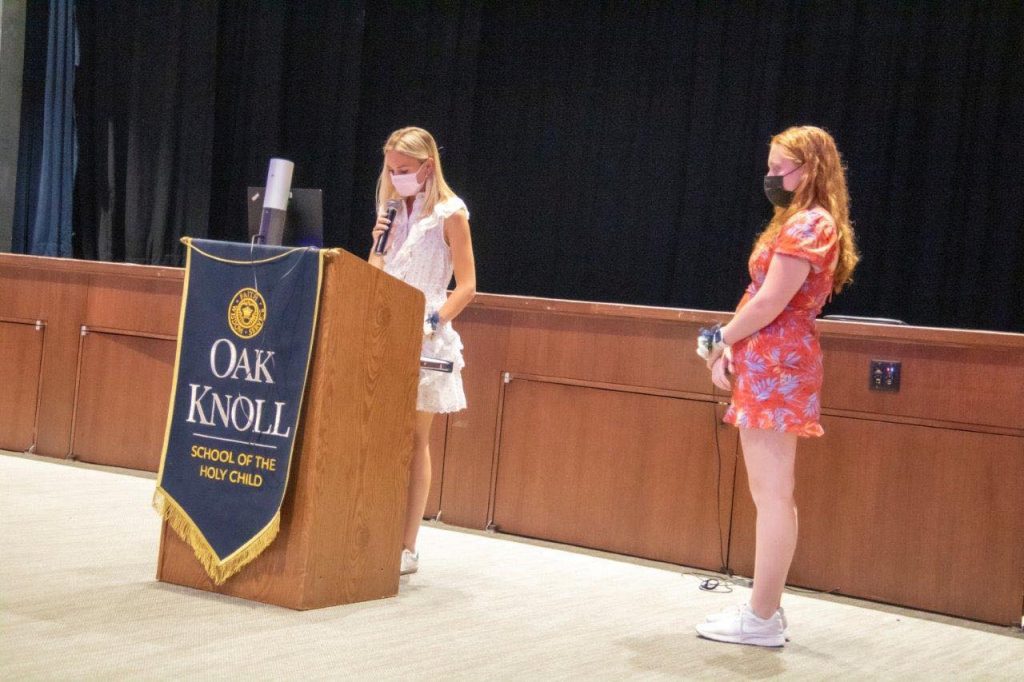 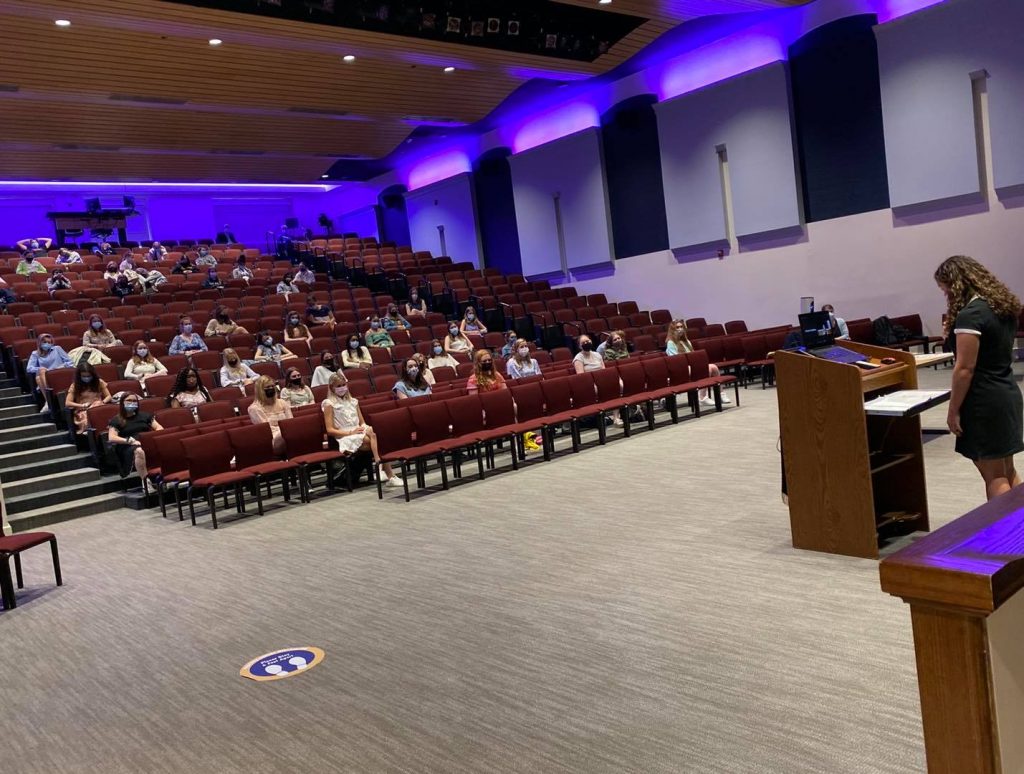 Other students, said Zavaleta-Tejeda, utilized their language skills through local summer volunteer opportunities either while some students hosted Spanish-speaking students in the fall of 2019 and planned on going to Spain on exchange before the COVID-19 pandemic.

“The students’ hard work, their commitment and unfaltering dedication to their learning another language has earned them the high recognition of being inducted into the La Sociedad Honoraria Hispánica, the La Sociéte Honoraire de Français and the National Junior Classical League Latin Honor Society,” said Zavaleta-Tejeda.

Upper School Division Head Kate McGroarty, who moved to France one month before her first day of high school not knowing the language, can relate to the inductees and said that learning another language takes grit and resiliency.

“I realized that if I was to achieve my goal of becoming bilingual, that my linguistic failures would outnumber my successes,” said McGroarty. “The French language taught me what it was to have passion and how to persevere toward a goal. The inductees today have demonstrated a passion for languages and a perseverance in your studies.”

Several students, many of whom will continue language study next year in college, shared reflections bilingually about all they have learned during their four years of world language study at Oak Knoll.

Molly McCann ’21, a member of Oak Knoll’s Honors French class, said she has been learning French for 13 years and has fallen in love with the language. “Taking French was one of the best decisions I have ever made and I’m so lucky and grateful to have studied it.”

Claire Shurmur ’21, of Latin Honors, said that Latin has provided she and her classmates with one of the most academically enriching and spiritually fulling experiences.

“A very small percentage of high school students have the opportunity to take Latin and as a small group we take great pride in our unique language,” said Shurmur. “Latin is not a dead language — rather one that is very much alive. We see Latin snippets in our everyday lives, more often than you would expect. We find it fun to go out in public and understand the saying on top of old buildings and get excited to hear a Latin phrase being talked about in a different class such as theology and be able to enlighten everyone with its meaning.”

Maura Ferrigno, of Honors Spanish 4, said Spanish is a language that is very important to her.

“It has helped us to immerse ourselves in the culture, ideas and traditions of the Spanish speaking world,” said Ferrigno. “Taking Spanish has inspired a passion for learning and the more that we progress, the more the benefits of learning a second language become clear.” 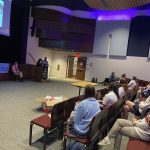 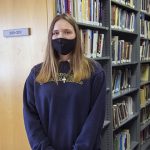